Church Of St. John At Kaneo 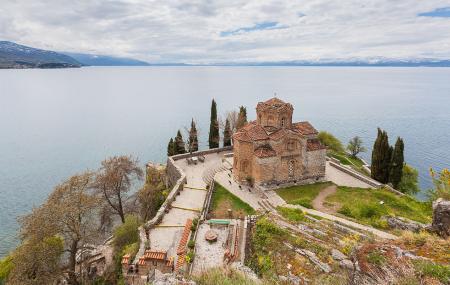 St. Jovan Kaneo stands on a cliff that overlooks the Kaneo beach and Lake Ohrid. This is one of those buildings that looks fascinating even from a distance. The stone construction with detailed arches, the central dome that extends upwards into and hexagonal tower and its rectangular layout are reminiscent of Byzantine architecture but a few people believe that this church is designed with deep influences of orthodox Armenian churches.

The church’s age is not known precisely but archaeologists have mentioned that the church must be built in the 13th century before the rise of the Ottoman Empire. The building was repaired in the 14th century before the Turks arrived in Macedonia. In the 20th century, an apse was built here with depictions of a number of saints and the Virgin Mary that have become one of the highlights of the church even today.

Other highlights of the place include:

A restoration project was carried on in the 1960’s that uncovered frescoes in the dome and along with the design and its sheer location, today, the church has become one of the best places to see history and art merge.

Entrance Ticket Details For Church Of St. John At Kaneo

How to Reach Church Of St. John At Kaneo

54.55% of people prefer walking in order to reach Church Of St. John At Kaneo

People normally club together Zura Apartments and Saint Clement Of Ohrid while planning their visit to Church Of St. John At Kaneo.