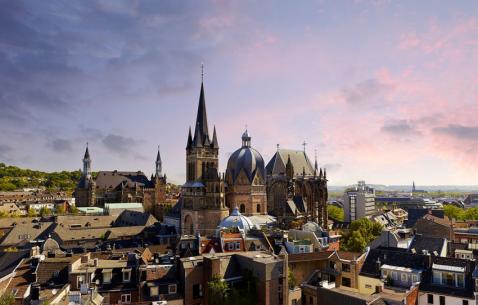 Aachen is a medieval German Spa-Town located on the border triangle of Belgium, Netherlands and Germany. Once a coronation place of many German rulers, it was referred to as the ‘watering place of the kings’. The city is renowned for its towering Cathedral, which became one of the first monuments in Germany to make it to the UNESCO world heritage list. Aachen is now one of the major educational destinations of Europe with four Colleges and Universities serving about 40,000 students focusing on Science, Engineering and Information technology.

From Neolithic times, there were traces of human inhabitation in the Aachen region. After the Roman era, it as a resort spa-town. The town flourished during the middle ages when Emperor Charlemagne (Charles the Great) turned Aachen into his winter capital and began the construction of the Cathedral. The town also prospered in trade and economy, thus gaining an imperial privilege. After being devastated and losing its importance by 1656, the town was restructured majorly influenced by the Baroque Architecture. Unfortunately, the World Wars added more to its destruction, although the Cathedral remained intact. Now, the city concentrates on science and technology, health sciences and tourism.

The city of Aachen is swarmed with numerous sightseeing places positioned between the residential and commercial areas. The narrow streets are mostly cobbled with medieval buildings and 20th century Gründerzeit houses on either side. Anybody who puts Aachen on their trip planners must know that this beautiful city takes pride in balancing both its medieval and modern aspects. Take time to climb atop the Lousberg hill to have a spectacular panoramic view of whole town.

The itineraries of Aachen doesn’t just include visiting museums or other places meant for the visitors. Pay a visit to one of their science centres or learn something about the educational excellence of the city. This city is brimmed with a lot of fun-filled activities to do, because of its rich and events round the year. Their impressive Christmas Market is one such event for which a number of tourists flock to Aachen every year.

Add Aachen to your vacation planners to have memorable holiday. And during one of those laid back days of the trip, take a stroll in the alleys, find a nice cosy restaurant and munch on their local sweetbread delicacy, Aachener Printen.

Essential travel information and Aachen tips for your visit