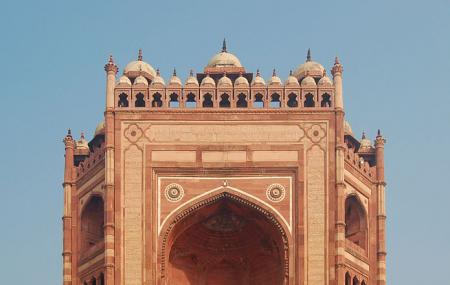 The Buland Darwaza is a very famous structure of the Mughal architecture, and since the built it has been regarded as the Gateway of Pride, Victory, and Magnificence of the Mughal Rule. The Buland Darwaza is built mainly of the used and traditional building stone of the Mughals- the red sandstone, along with buff sandstone. As additional and decorative bearings, the top of the main courtyard are built of black and white marble along with engraving patterns of coloured stone.

The structure exhibits perfect geometrical symmetry, and has a long flight of stone steps that leads to the base of the fort. Being the biggest gateway, the Buland Darwaza secures the Fatehpur Sikri from the southern side. The inscriptions upon the interior walls of the structure bear the religious liberalism followed by Akbar throughout his reign and life.

How to Reach Buland Darwaza

Love this? Explore the entire list of places to visit in Agra before you plan your trip.

Fancy a good night's sleep after a tiring day? Check out where to stay in Agra and book an accommodation of your choice.

88.73% of people prefer to travel by car while visiting Buland Darwaza