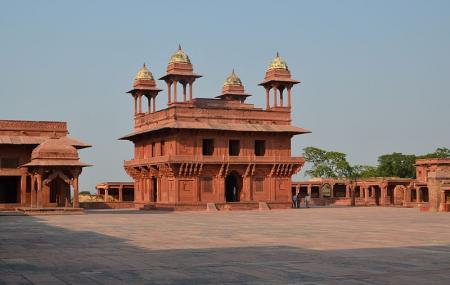 The Fatehpur Sikri is presently a municipality of Agra but it is nationally as well as internationally famous for being a heritage city of tremendous historical importance. Emperor Akbar had founded the city as the capital of the Mughal Empire, and the city remained the functional capital till 1585. Akbar himself had laid out and directed the design and detailed organization of the Fatehpur Sikri, through the building of a vast group of royal residences for the elite members, harems, courts of justice, and private residential houses for the functional members.

The constructions also included a mosque and buildings and palaces for various official as well as informal purposes. The traditional red sandstone was used in the majority of the build of the city and its components. The fort wall enclosure of Fatehpur Sikri is intercepted at intervals for the accommodation of the giant gates- the Delhi Gate, the Lal Gate, the Agra Gate, Birbal’s Gate. The other gates are the Chandanpal Gate, the Gwalior Gate, the Tehra Gate, the Chor gate and the Ajmer Gate.

How to Reach Fatehpur Sikri

Love this? Explore the entire list of places to visit in Agra before you plan your trip.

Fancy a good night's sleep after a tiring day? Check out where to stay in Agra and book an accommodation of your choice.

93.48% of people prefer to travel by car while visiting Fatehpur Sikri

People normally club together Itmad-ud-daulah and Buland Darwaza while planning their visit to Fatehpur Sikri.

People also prefer to start their day with Fatehpur Sikri.