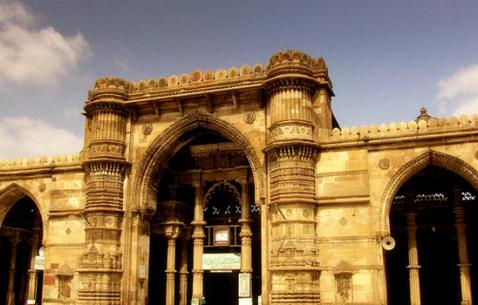 The sixth largest city in India, Ahmedabad is one of the culturally rich modern cities of the country. It is not known for its tourism industry but is a city worth visiting to understand the changing face of India.

The foundation of the city was laid by a Solanki ruler in the 11th century. It was called the city of Karnavati. A huge fort with twelve gates was the centre of the city. The city kept expanding outside the fort and grew in all directions.

It is interesting how the British treated the city during the British rule. Unlike other Indian cities, they did not integrate Ahmedabad in their ways of life. They kept themselves to the cantonment area and did not build any religious buildings or schools in the city.

The Sabarmati ashram of Mahatma Gandhi in Ahmedabad made it the primary centre of the Non violent Independence struggle. It is one of the important landmarks of the city which still promotes non violent approach against corruption in the country.

It is the main centre of the Gujarati culture and literature. Gujarati literature has a long tradition of wonderful work with depth and layers. Many of the authors have found a home in this beautiful city.

Ahmedabadi people are known to be extremely friendly and welcoming. The long festival of Navaratri is one of the merriest dancing festivals in Ahmedabad. Everybody dresses up and gears up for rounds of Garbha and Dandiya.

Ahmedbad has emerged as an important trade and industrial centre in India. It exports a number of things and the second largest cotton producer of the country. The Gujarathi community known for its business sense and talent has taken care of putting this city on the world map.

Because of its huge textile industry, the city is a popular shopping destination. Many people travel to the city to buy cloth and other supplies. The city is well known for good quality trendy clothes. Many wedding parties purchase wedding garments here.

Overall, Ahmedabad is an ideal city for living in India due to its vibrant cultural scene, the delicious Gujarathi cuisine, the high living standards and liberal atmosphere.

If you want to visit this city, you can volunteer for organizations that work in the city for social development and Women empowerment. Taking traditional Dandiyaraas classes and spending a Navaratri at Ahmedabad is also something you can do!

Essential travel information and Ahmedabad tips for your visit

Plan Your Trip To Ahmedabad

The best tours and activities in the city, guided by experts to give you a local insight to the best of Ahmedabad