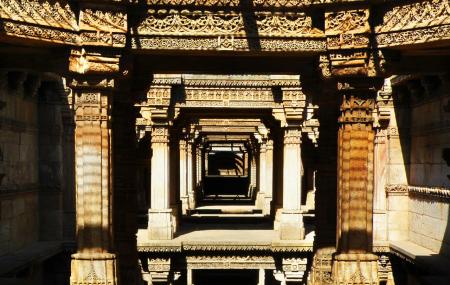 The Adalaj step well also called ‘vav’ in Gujarati is a unique Hindu water tank that is built in the small village of Adalaj in Ahmedabad. It was a very important place in the early times as this was the main source of water for daily use to the people of the region. It was completed as a dedication to Queen Roopba, wife of Veer Singh, the Waghela Chief.

The legend says that during the 15th century Veer Singh of the Vaghela Dynasty ruled this region which was then called DandaiDesh. It was attacked by a Muslim ruler of a neighboring kingdom known as Muhammad Begda. In the war the Hindu king was killed. Begda was so attracted to the beautiful widow of Veer Singh, Queen Roopba that he proposed to marry her. The queen in spite of being in heavy grief accepted his proposal with a condition before him to complete the construction of the step well. The desperate Muhammad Begda accepted this condition and completed the construction work in a record time. After this when he reminded the queen of her promise she ended her life instead of marrying him by jumping in the same well that was built by Begda. The well thus, bears the tragedy of this queen in its walls till now.

The well is built in sandstone in Solanki Architectural style. It has 5 levels. The top is octagonal in shape based on many exquisitely carved pillars. Each level has a large area as it was also used to celebrate occasions during those times. The depth is for the purpose of water extraction. All the levels are different from each other in design. The top portion has no roof. The motifs of Hindu and Islamic designs, with the sculptures of Hindu and Jain gods on all the levels, make a lovely fusion of both the cultures. The carvings on the wall shows women performing their daily activities such as, adorning themselves, churning out buttermilk, etc and the king overlooks all these. There are also beautiful carvings of the divine pot and the magical tree mentioned in the ancient scriptures. The temperature inside the well complex is quite lower than the outer temperature.

How to Reach Adalaj Step Well