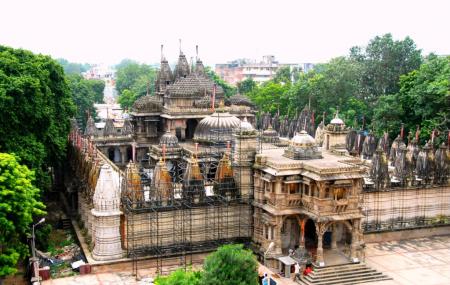 This temple is better known as the Hutheesing Jain Temple. It is the largest Jain temple of Gujarat. The temple was originally a plan of Sheth Hutheesinh Kesarisinh, a wealthy trader of Ahmedabad. He unfortunately passed away at an age of just 49 years and thus leaving the plan incomplete. This was thereby supervised and completed by his wife Shethani Harkunvar. It cost her lakhs of rupees, which was too huge an amount in those times. The temple was dedicated to the 15th Jain Teerthankar, Dharmanatha. The cost was estimated later to be more than a million dollar by the son of the trader Muggenbhai Hutheesing. The temple was built during a tragic famine condition in Ahmedabad and so, it gave a work opportunity to many poor people. It is since been maintained by the Hutheesing family Trust.

The architect was Premchand Salat. The temple was originally two storey. The idol of the prime deity is made of milk white marble that looks very beautiful. The main temple has 11 deities in it, 6 in the basement and the rest divided in the three- bay sanctuary. The main shrine is on the eastern side of the temple. The temple has a big dome roof supported by 12 ornate pillars. There are 52 shrines other than this, each having an idol of a teerthankara. There is also a line of shorter shrines adjoining the main temple on three sides. The most striking feature is a Manasthamba inspired from the Jain Manasthamba and the Kirtisthamba of Chittore, Rajasthan.

Check out and explore more things to do in ahmedabad city.