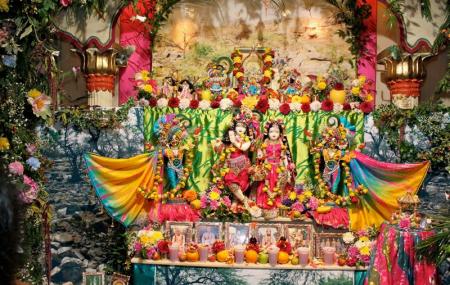 The International Society for Krishna conciousness was founded by his divine grace Bhaktivedanta Swami Prabhupada in 1966. It is of the Gaudiyavaishnava tradition. This was a style of spiritual tradition according to the Bhagavad – Gita and the Shrimadbhagavatam. The culture and philosophies of ISCKON were first established by Sri Sri Chaitanya Mahaprabhu. He is said to be a direct avatar of Lord Krishna along with the 6 Goswamis of Vrindavan. The Mahaprabhu was the seed for a massive Bhakti movement in India that became very popular. Sri Chaitanya had many followers to spread the Krishna Conciousness philosophies. His followers included many to form the Vaishnava clan. This also included a fantastic theologian, Bhaktivinoda Thakur, who brought this clan in front of the modern audience. His son, Bhaktisiddhanta Saraswati Goswami took forward the legacy perfectly to spread the consciousness in the west also. He is the spiritual prophet of the Srila Mahapada School of the Bhakti Movement.

The beautiful ISCKON Temple in Ahmedabad boasts of a majestic height with amazing pillars carved with the events of Lord Krishna’s life such as his pastime activities, etc. it is one of the largest modern temples in India. It is built in a lovely combination of the Gujarati Sompura and the RajasthaniKhamira architectural styles. The temple can house 4000 people at one time and has the idols of Radha-Krishna, Gaur-Nitai, Sita-Rama-Lakshmana-Hanumana, Shrinathji, Jagannath Balaram Subhadra and other forms of Srila Prabhpada and Srila Bhakti siddhanta Saraswati. The pillars have ornamental stone carvings, marble floors with marvelous colorful granite designs. The windows are carved in Rajasthani Mewa’s style and the Khemira decoration. The ceilings also have stunning Araish designs.

The temple thus aims at spreading peace among members of the society and bringing people nearer to Krishna.

Check out and explore more things to do in ahmedabad city.

How to Reach Iskcon Temple

92.22% of people prefer to travel by car while visiting Iskcon Temple

People normally club together Vastrapur Lake and Manek Chowk while planning their visit to Iskcon Temple.