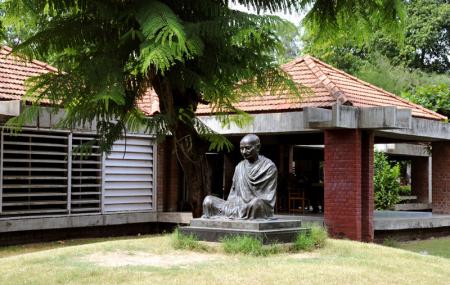 Sabarmati Ashram was set up by the Father of Nation- Mohandas Karamchand Gandhi or better known as Mahatma Gandhi. He was also referred to as ‘Bapu’ by many out of love for him. Gandhiji thought this place just near Saint Dadeechi’s temple, the jail and the crematorium was just perfect to carry on his activities for the search and establishment of truth, pure culture and freedom for the countrymen. He said that this place was perfect as the power of Mother Nature was much more powerful than the power of the foreigners together. The ashram was opened fully in 1917.

Gandhiji used to stay in this ashram along with his followers and other freedom fighters and carried on his acts of fearlessness to again bring back the dignity and glory of India. He stayed here for many years till he left for the Dandi March or the protest against the salt law on 12th march 1930 and promised that he would not return to the ashram before the country was freed.

The renovations of the museum were later completed in the year 1963. The main attraction in this ashram is the museum whose objective is to put up the memories and historic events in the life of the great man. This museum has been named as The Gandhi Smarak Sangrahanalaya and was established in the year 1951. It also houses many books, manuscripts and photocopies of important documents.

The beautiful things include portraits of Gandhiji with his wife Kasturba and other things used by Gandhiji himself like his study table and his spinning wheel, which is the major symbol of this ashram. There is a wide range of books in Indian languages and most importantly the autobiography of Mahatma Gandhi. The ashram highly promotes local handicrafts and these are sold along with other books, etc for no profit at all.

The ashram does many other activities, such as-

Check and explore out more things to do in ahmedabad city.

How to Reach Sabarmati Museum

People normally club together Teen Darwaja and Sabarmati Riverfront while planning their visit to Sabarmati Museum.