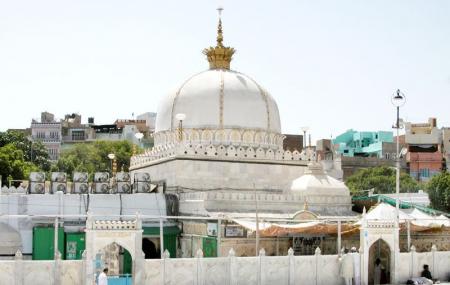 The Dargah Sharif or the Ajmer Sharif is a Sufi shrine of the great Moinuddin Chisti, who is also known to be the spiritual mentor of Emperor Akbar and had blessed him with his sons. This shrine is popularly known as the Khwaja Garib Nawaz Dargah Sharif. This shrine is a very popular tourist place not only for the Muslims but for people of all religions mostly for its historical significance and its popularity. The shrine is located at Ajmer in Rajasthan, India.

The main gate of the shrine is known as the Nizam Gate which is followed by the Shahjahani Gate. This gate is said to have been made by Emperor Shah Jahan and thus the name. This gate is again followed by the Buland Darwaza. This is the place where the Urs flag is hoisted. It is to mark the beginning of the main festival here. The Urs Festival is celebrated on the 6th and 7th Rajab.

The architecture of the shrine is in a typical Islamic or the Mughaliya style. The shrine is full white in color and has a dome and minarets on the four sides of the dome. The main attractions here are the Kalandars from Mehrauli. They are called the friends of Garib Nawaz and come here from Delhi every year. They come here walking all the way. They offer colorful ‘Chadders’ with gold and silver threads and many more.

The affairs of the shrine are all authorized by the government under The Dargah Khwaja Saheb Act, 1955. The committee here appointed by the government manages and looks after everything starting from donations, maintenance, running charitable institutions such as dispensaries, guest houses, etc.

How to Reach Dargah Shariff

Love this? Explore the entire list of places to visit in Ajmer before you plan your trip.

Fancy a good night's sleep after a tiring day? Check out where to stay in Ajmer and book an accommodation of your choice.

91.61% of people prefer to travel by car while visiting Dargah Shariff

People also prefer to start their day with Dargah Shariff.