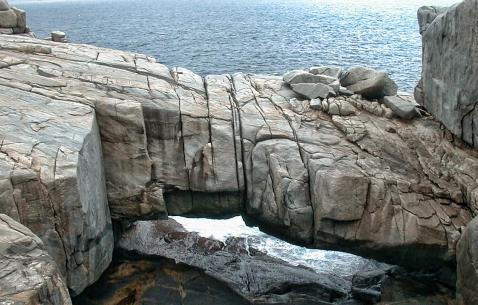 Albany /ˈælbəni/ is a port city in the Great Southern region of Western Australia, 418 km SE of Perth, the state capital. Albany is the oldest permanently settled town in Western Australia, predating Perth and Fremantle by over two years. At June 2015, Albany's estimated urban population was 33,970, making it the state's sixth-largest population centre. The city centre is at the northern edge of Princess Royal Harbour, which is a part of King George Sound. The central business district is bounded by Mount Clarence to the east and Mount Melville to the west. The city is in the local government area of the City of Albany. Albany was founded on 26 December 1826 as a military outpost of New South Wales as part of a plan to forestall French ambitions in the region. To that end, on 21 January 1827 the commander of the outpost, Major Edmund Lockyer, formally took possession of the western third of the continent for the British Crown. The area was initially named Frederick Town in honour of Prince Frederick, Duke of York and Albany. In 1831, the settlement was transferred to the control of the Swan River Colony and renamed Albany by Lieutenant-Governor James Stirling. During the last decade of the 19th century the town served as a gateway to the Eastern Goldfields. For many years, it was the colony's only deep-water port, having a place of eminence on shipping services between Britain and its Australian colonies. The opening of the Fremantle Inner Harbour in 1897, however, saw its importance as a port decline, after which the town's industries turned primarily to agriculture, timber and later, whaling. Today the town is a significant tourist destination and base from which to explore the south-west of the state, and is well regarded for its natural beauty and preservation of heritage. The town has an important role in the ANZAC legend, being the last port of call for troopships departing Australia in the First World War.

This warm abode of is a delightful place to visit in . Tour packages of are of 1 to 2 days duration.

Plan Your Trip To Albany

The best tours and activities in the city, guided by experts to give you a local insight to the best of Albany