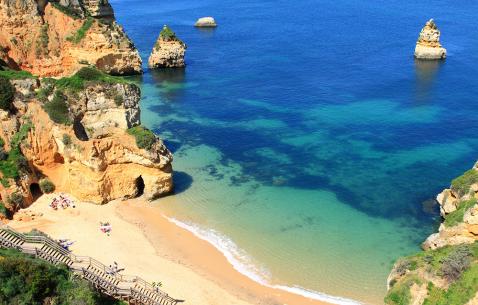 Teeming with history, the old town of Albufeira, located in the coastal Algarve region of southern Portugal, is speckled with ancient monuments and churches. Its charming, cobbled streets blossom in daylight into lively restaurants, cafes, bars and shops offset on one end with luxurious beaches abundant with silky, golden sand and azure waters. Albufeira sightseeing is will make you want to stay here!

Coupled with the wonderful weather conditions the region experiences, it is, in fact, little wonder that Albufeira is a much-coveted tourist destination for globetrotters and travel enthusiasts around the world, seeking some Portuegese sun and sand, overlooking the North Atlantic Ocean. Just a short transfer from Faro airport, Albufeira caters to a range of travellers with honeymooning couples, families and hippies unanimously in awe of the city’s splendour. Besides its old-world charm, Albufeira nightlife is lively and boats itself in São João and Albufeira marina is populated with quirky sugar candy-coloured apartments.

In Roman times, Albufeira was called Baltum, later re-named Al-Buhera by the Moorish settlers in the 8th Century. In the 13th century, it was finally taken over from the Moors by the 'Knights of the Order of Santiago'.

Like many Algarve towns, Albufeira is home to the remains of an 18th-century castle, most of the original structure of which was destroyed in the 1755 earthquake. The Torre do Relogio (clock tower) endures however, built on one of the old castle towers, testament to its long-standing history; lit up on special occasions for a festive show of celebration.

Until the advent of Albufeira tourism in the ‘60s, Albufeira was a small Portuguese fishing village. Since then, considerable development has turned it into the most popular seaside resort town in the Algarve region, but its persists quietly in retaining its innate cultural charm.

The Albufeira Marina is on the western outskirts of the town and it is quite unlikely that you’ll miss the popping colours of blue, pink, orange, green and yellow that most of the apartments and buildings here are painted! The marina walkway also has some intriguing dolphin statues, and a visit here is sure to give you that away-from-everything-feeling due to the inherently quirky nature of the place. A Holiday in Albufeira will be a colourful event.

The marina is also the starting point for many of the most popular things to do in Albufeira, such as boat trips, fishing trips and diving excursions. If taking a dip in the deep blue isn’t your thing, then get adventurous on dry land – rent a Segway and cruise down the marina’s promenade with a view of the fishermen going about their daily business.

While the summer months are a natural tourist peak in Albufeira, autumn and winter bring with them a different sort of charm when the city lies emptier and quieter, while retaining the same effortless grace. The bars, restaurants and shops remain very much open so for those allergic to the bustle of city life and crowds, head out here off-season for some peaceful relaxation in the Portuguese sun to the ancient town of Albufeira.

Plan Your Trip To Albufeira

The best tours and activities in the city, guided by experts to give you a local insight to the best of Albufeira