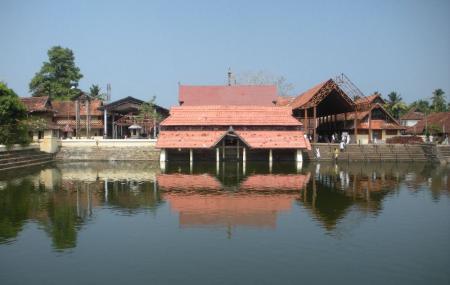 The Ambapuzha Shree Krishna Temple is supposed to have been built during the 15th – 17th century by the local ruler called Chembakasserry Pooradam Thirunal Devanarayanan Thampuran.

The major attraction here is the ‘payasam’ or the delicious pudding made with rice and sweetened milk which is popular among many Hindus. An interesting mythological legend says that every day when the payasam is distributed among devotees here, Lord Guruvayoorappan visits here around the same time.

The legend behind this payasam says that once Lord Vishnu appeared in the court of the king here and challenged him for a game of chess. The king being a chess enthusiast himself happily agreed to the invitation and told the sage to decide what prize he wanted if he won. The sage very modestly said that his needs were very few and he would only take grains of rice from him in a measure as how much it would be if they placed it on the chess board. They would have to measure it in such a way that the first square would have one grain, the second would have two, third would have four, the fourth sixteen and so on in a way that every square will have the multiple amounts of grains of its predecessor. The king not understanding the trick became upset that the sage asked for such a meager amount when he could happily give away so many other things. In an obvious manner the sage won the game and now it was time to measure the amount of grain in the decided manner. When the counting started the number of grains started increasing and it went on to more than a trillion and the king realized that he would not be able to fulfill his promise even if he would add all the grains of his kingdom and the neighboring kingdoms put together. In this moment of crisis, Lord Vishnu appeared in his avatar and told the king that he would not have to pay his prize at once but will have to in time. It id from that time that the payasam with milk and rice is offered to the Lord every day to pay off his debt.

The Ambalapuzha Festival is the main festival celebrated here to mark the commemoration ceremony of the establishment of the temple deity. This festival is also known as the Chambakulam Moolam Water Festival. The other main festival here is the Aarattu Festival.

Love this? Explore the entire list of places to visit in Alleppey before you plan your trip.

Fancy a good night's sleep after a tiring day? Check out where to stay in Alleppey and book an accommodation of your choice.

93.25% of people prefer to travel by car while visiting Ambalapuzha Shree Krishna Temple