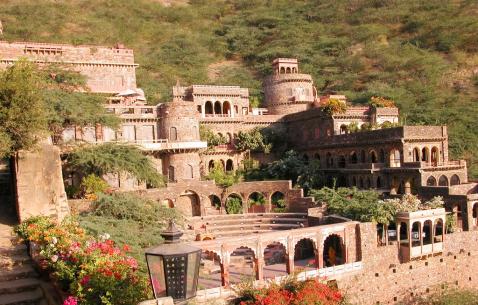 Called the most beautiful of all the princely states of Rajasthan, Alwar is the land of adventurers and risk takers. A breathtaking fort that defines the strength of the region reminds you of its golden yesteryears. Alwar is surrounded by the Aravali mountain range. The tale of how Ulwar became Alwar is very interesting. The King of Ulwar did not like that when arranged alphabetically, Ulwar always turned up in the last few names. So it changed it to ‘Alwar’. Historically, Alwar was a part of the Matsya dynasty in ancient days. A Rajput Muslim ruler called Hazi Khan Mewati was overthrown by the Mughal kind Akbar and the state came under Mughal rule around 1550AD.

After centuries of Muslim rule, the Ulwar princely state was finally formed by Pratap Singh of the Kachhawa clan in the second half of the 18th century. After merging the princely state in Independent India, Jai Dayal Yadav developed the area and played an important role in bringing western education facilities to the grassroots level.

Over the years, the city has evolved as an important agricultural center in Rajasthan. Even though the rainfall distribution in the area is uneven and scattered, it manages to grow a variety of crops with the help of irrigation facilities. Alwar is known for its rich mineral wealth. Marble, Granite, Feldspar, Dolomite, Quartz, Limestone, Soapstone, Barites are exported to all over India from the district headquarters. Because of this same reason, you will find beautiful houses all around the city.

Interesting exhibits of Rajputiyana architecture can be found in Alwar. The influence of Mughal designing is seen in a few monuments whereas some sculptures and stone carvings remain loyal to the local dynasties. Many tourists travel to Alwar for experiencing the wandering spirits in the Bhangarh fort, which is said to be cursed by a Tantric magician. Ghosts or not, the fact that the Archaeological Department of India has banned entry into the fort before sunrise and after sunset, which is very amusing.

The Siliserh Lake, The Vijay Mandir Mahal, Bala Quila, The Government Museum and Vinay Vilas City palace are a few of the tourist attractions in Alwar. Many of the attractions are historical monuments that are maintained well by the authorities. Rajasthan is the land of beauty and of bravery; it is the land of vibrant colors and passionate painters. Alwar is a city that represents the state very well. Traditional Rajasthani Laakh bangles and, Rajasthani traditional articles, handmade paper and Rajasthani paintings are hallmarks of Alwar tourism.

It has become a popular holiday destination in the past few years. Picturesque lakes, seemingly endless beauty, a tiger sanctuary and a haunted fort! Adventure lovers, here you go!

Essential travel information and Alwar tips for your visit