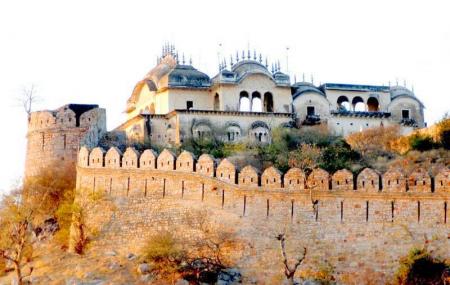 The Bala Quila Fort is one of the oldest forts of Rajasthan. It was said to be built by Hasan Khan Mewati in 1550 AD. It is also said by some legends that the monument was built by the Nikumbh Rajputs in 928 AD. It later passed on to The Pathans, The Marathas, The Mughals, The Jats, The Kacchwaha Rajputs and at the end was captured by Maharao Raja Pratap Singh, the owner of Alwar in 1775 AD. History says that the fort was visited by Mughal Emperors such as Babur and Jahangir. Babur is said to have spent a night over here and he had also taken away the hidden treasure from here and gifted it to his son Humayun. Later, Akbar sent his son Salim there on exile for three years and a part where he stayed is known as Salim Khana.

The Bala Quila is said to be ‘The Pride of Alwar’. It is a shining example of bravery and graciousness of the Rajputs. The Bala Quila fort underlines the meaning of ‘fort’ mentioned in the ancient scriptures which says that it is ‘the strength of a king’.

The fort is situated at around 15kms from the main city and is at a height of above 300 meters. It is said to have been built at such a height so that every detail of Alwar can be viewed from there. The beautiful architecture of the fort includes-

The most attracting feature is the view of the city of Alwar decorated with lakes. This place is an example of Indo-Islamic architecture and stunning craftsmanship. The scriptures inscribed inside are worth a visit.

Thus, this place is a page of history, which takes you 1100 years back to the delightful era of the Royals.

How to Reach Bala Quila

92.59% of people prefer to travel by car while visiting Bala Quila

People normally club together Jaisamand Lake and Late Night Shopping In Alwar while planning their visit to Bala Quila.