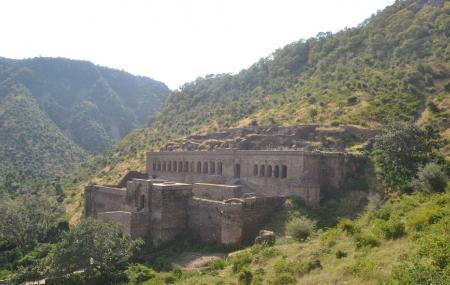 Once, a beautiful town with palaces, markets, people and armies is now a ruined site. The Bhangarh Fort was built in the year 1573 as the residence of Madho Singh. He was the son of Raja Bhagwant Das and the younger brother of Man Singh I. After the decline of the Mughal Empire and the famine of 1783, the population of this place declined almost completely. This place is also known to be one of the most haunted places in the world and is called “The House of Ghosts” by the locals here.

There are two bhangarh fort myths - first is that it was cursed by Guru Balu Nath, who said that if the shadow of any building reached his abode, the whole city will be finished. It is believed that once a king built his palace higher than the saint’s dwelling and after a few days the whole palace collapsed.

The second bhangarh fort story is that a wizard called Singhia who was bewitched by the beauty of Princess Ratnavati tried to possess her by replacing her oil with a magic potion. But the princess got to know about this and she dropped the oil on a boulder which crushed the wizard. Singhia cursed that Bhangarh will be finished and the following year there was a battle which killed everyone who lived there including Ratnavati. It is still said that the fort waits for its princess to return. There are may more bhangarh fort incidents to make this place famous. So visiting Bhangarh Fort at night is only meant for the daredevils.

Once you enter the fort, you will find:

Thus, this place is a wonderful view of the countryside in the Aravalli range. It is spine chilling with mysteries and  Bhangarh Fort haunted stories unfolding at each step and then it is up to you to decide after the visit if this place is actually haunted or are these mere stories of the locals here!

How to Reach Bhangarh Fort

People normally club together Sariska Tiger Reserve and Attraction while planning their visit to Bhangarh Fort.