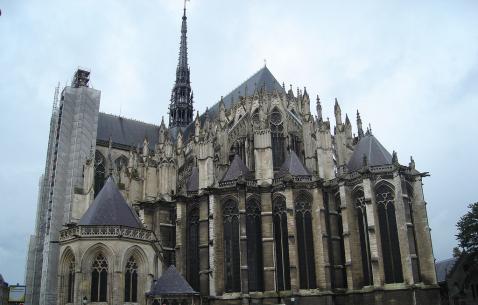 Amiens, the capital of Picardy’s Sommes Department, is historical city situated in the Northwest of France. The city became a famous place for tourism (especially weekend getaways) because of its proximity to cities like Paris, Lille and Brussels. The remarkable poise of the Amiens Cathedral alone fetches a place in the trip planners of millions of tourists.

Samarobriva, a settlement by the Ambiani tribe was the earliest known record of Human Inhabitation in Amiens. Barbarian tribes and Normans clashed a lot over the region until the King of France recognized it in 1113 and merged Amiens into the Crown of France. The textiles trade flourished in the city during the 18th and 19th centuries. After the industrial revolution, the Amiens’ first railway line was incorporated and the city walls were demolished to open up space for boulevards in town centre. The city was invaded by the Prussians during the Battle of Amiens, and saw a great damage during both the World Wars.

The itineraries of Amiens most importantly include Notre Dame d’Amiens, a thirteenth century Cathedral which is regarded as the Gothic Magnum opus of the city. It is a one-of-its-kind construction you’ll see in the whole of France.

Architect Pierre Dufau took the responsibility of restructuring Amiens into what we see today. Widened streets, brick, white-stone and concrete structures and slated-roofs are the typical scenes you come across while exploring the city.

Set your vacation planners to Amiens this holiday, and indulge yourself in this city of festivals of events. Experience the biggest Christmas market in Northwest France and savour their sumptuous Macarons, Almond paste biscuits and other local delicacies in one of their cosy restaurants.

Plan Your Trip To Amiens

The best tours and activities in the city, guided by experts to give you a local insight to the best of Amiens