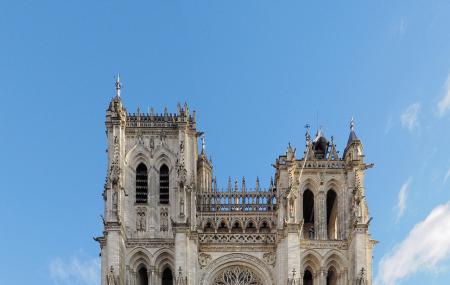 Quoted as ‘the very finest thing done perfectly in its manner by northern Christendom’ by the English critic John Ruskin, the monument justifies the statement. Classified as a UNESCO World Heritage monument it’s the tallest and the largest Gothic church in France and is truly a monument apart. Although the construction began in the year 1220A.D the very first church of Amiens was formed as far back as 3rd century by St. Firmin. From laying the cornerstone to its completion it took about 50 years.

Although the cathedral remained largely un-harmed throughout the ages and also during the World Wars it was subjected to many other damages. Repeated occurrence of accidental fires claimed a lot of original stained windows from the 1200s. Yet the Cathedral today stands majestic, embodying both its glory and its scars with grace, a must visit.

How to Reach Cathedrale Notre-dame D'amiens

Love this? Explore the entire list of places to visit in Amiens before you plan your trip.

Fancy a good night's sleep after a tiring day? Check out where to stay in Amiens and book an accommodation of your choice.