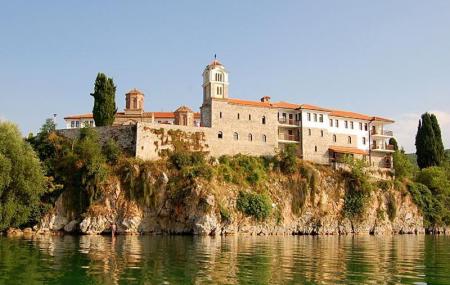 Find hotel near St.naum Of Ohrid

The Monastery of Saint Naum was founded by Saint Naum in 905 during the time of the Bulgarian Empire. Saint Naum was a notable writer and teacher during the medieval period. He was the disciple of Saints Cyril and Methodius who were  credited for being the founder of Glagolitic and Cyrillic scripts. St Naum was also one of the founders of the Pliska Literary School.

All through the 16th century, the monastery had a Greek school before which it was destroyed and remained in ruins till the 13th century.  Today, the church is one of the prized possession of the region and is also one of the oldest monasteries you can find in this part of the world.  Walk in to the see the beautiful frescoes that date back to the 16th and 17th century and rare Byzantine Greek etchings on the monastery walls. A few other Slavic inscriptions seen here are a rare find and it is believed that this is one of the earliest evidences of Slavic literature in the world! The paintings of the Balkans date back to the 18th century while the iconostasis that is carved out of wood dates back to 1711. However, the highlight of the place is the tomb of St. Naum. It is believed that if you rest your ear on the tomb, you can still hear the heartbeat of the saint!

In its entirety, the monastery manages to spell a cast on its visitors- the lush green surroundings, the beautiful gardens where you can easily spot peacocks and the enchanting view of Lake Ohrid.

How to Reach St.naum Of Ohrid

95% of people prefer to travel by car while visiting St.naum Of Ohrid

People normally club together Saint Demetrius and Bay Of Bones Museum while planning their visit to St.naum Of Ohrid.