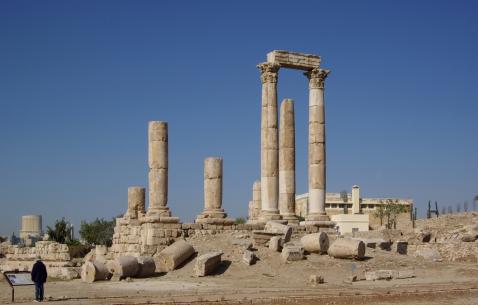 If you crave an authentic Middle-Eastern experience, Amman will quench your thirst. Young and thriving, this one place that is forever buzzing with the urban and not so urban aspects. A beautiful melange of the earthy and the contemporary, the city does not cease fascinating you. Rightly so, it is also referred to as the modern and ancient capital of Jordan. Its beautiful topography atop mountains and hills, with a desert on one side and the fertile Jordan valley on the other, renders to the picturesqueness of the capital.

The urban part of the city is an energetic mishmash of swanky buildings, smart restaurants, 5-star properties along with art galleries, traditional coffee shops and quaint tiny artisans' workshops. However, as you explore the city you are likely to encounter several evidences of Amman’s history. Speaking of which, you must know that this is a city which has been continuously inhabited. Thus, justifying its being of one of the oldest cities of the world.

The temperate climate of Amman has been one of the biggest purpose for its flourishing civilization. As you hit the roads of this long-established metropolis, you are subject to sights of tree-lined streets with avenues of white, symmetrical houses and elegant structures with a rather interesting municipal law stating that every construction must be clad with local stone, hence, executing uniformity throughout the city. This against a backdrop of the remnants of the bygone civilization, is simple breath-taking! Like every old city, this one too, has two parts, a modern one and a downtown one. The downtown part is where you will get to experience the authenticity of Amman, with traditional businesses. From handicrafts, kebab stalls roasting succulent meat, besides coffee stalls to jewellery that will leave you smitten and mundane household items. Plus, the locals will further enlighten you about every product warmly, taking pride in their customs.

All in all, Amman promises a rustically primitive experience accommodating a modern vibe, just rightly.

Essential travel information and Amman tips for your visit

Plan Your Trip To Amman

The best tours and activities in the city, guided by experts to give you a local insight to the best of Amman