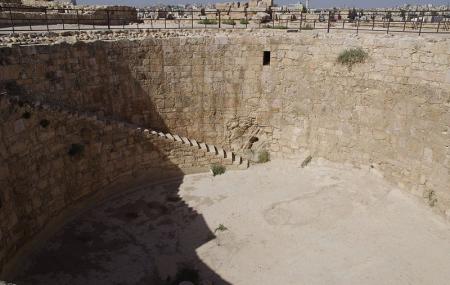 This hill, one of the seven that make up Amman, is of historical interest not just to the country of Jordan back to the entire human race. It has been settled by humans for more than 18,000 years as far back as the Paleolithic Age. After the Assyrian, Babylonian, and Persian occupations, the Romans came, and destroyed much of what came before them. Later the area was occupied by Byzantine and Ummayad rulers. It's a began to seriously decline after the thirteenth century. The highlights of the complex are:

You will find that ticket office on the road leading up to the entrance. It is recommended that you hire one of the license to guide to show you around. They are multilingual and really know the place.

How to Reach Amman Citadel

Love this? Explore the entire list of places to visit in Amman before you plan your trip.

Fancy a good night's sleep after a tiring day? Check out where to stay in Amman and book an accommodation of your choice.

People normally club together The Odeon Theater and Jordan Archaeological Museum while planning their visit to Amman Citadel.

People also prefer to start their day with Amman Citadel.