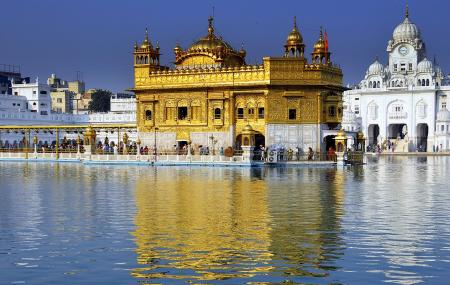 What Mecca is to Islam, Amritsar is to Sikhism! The Golden Temple is a symbol of religious sanctity among the Sikhs. Situated in the premises of the Harmandir Sahib, the Golden Temple Amritsar is at the end of a long causeway, preceded by the Amrit Savovar (Pool of Nectar), said to be the holy water with healing and redemption powers. Many devout Sikhs come and bathe and cleanse themselves in the tank which holds the Amrit (Nectar). The Golden Temple opens its door to people from walks and faiths of life. This open mind ideology stems from the belief that everyone is welcome to come and worship as all are equal in the eyes of God.

The architecture of the Golden Temple has nuances of both Hindu as well as Muslim architecture. The lower level is made out of elegant marble and is reminiscent of the interiors of the Taj Mahal with its motifs and pietra dura. The second level of the Temple showcases engraved golden panels and a dome made from 750kg worth of Gold. The place of worship, the Gurudwara, is on the second level. Photography is prohibited within the inner sanctum. The Adi Granth, considered to be, the holiest book is placed at the sanctum during the hours of worship. Chants from the Guru Granth Sahib are playing in the background feeling with the visitor, a feeling of tranquility.

The premises of the Harmandir Sahib run the largest free kitchen in the world, feeding around 80,000 plus people every day. Also, visit the popular attractions in the city by following Amritsar itinerary 3 days.

Golden Temple Timings - 3am to 10pm

How to Reach The Golden Temple

Love this? Explore the entire list of places to visit in Amritsar before you plan your trip.

Fancy a good night's sleep after a tiring day? Check out where to stay in Amritsar and book an accommodation of your choice.

66.88% of people prefer walking in order to reach The Golden Temple

People normally club together Sri Harmandir Sahib Amritsar and Jallianwala Bagh while planning their visit to The Golden Temple.