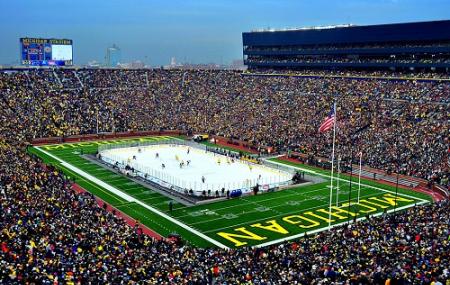 Nicknamed as “The Big House”, the Michigan Stadium is a prized possession of the University of Michigan. The stadium was founded in the 1920’s by Fielding Yost. Although built on a smaller space, Yost felt the need to have a lager space with the growingfan base. The new site of the stadium was built on the site of an underground spring which during construction, turned into a quicksand. Even today, the stadiumground has a buried crane under its field! To add to the incident, the water table was high,causing morethan half of the stadium structure to be below the ground level!

Soon the structure was strengthened with reinforcements of steel and the stadium opened as one of the biggest university owned stadiums in the country. After a number of additions to its beginning estimation of 72,000 seats, the place can currently seat more than 107,601 people and has a strong fan following for the “Wolverines”. Over the course of the time, the place has hosted NFL, Soccer games including the 2014 Real Madrid VS Manchester United and theVarsity Women’s Lacrosse team among other top league football matches.

Highlights of the placeinclude the design and state-of-the-art additions that improve the experience including a FiedlTurf which isan artificial surface that offers real grass-like playingcharacteristics. The dynamic energy of the place feeds of the fact that this is by far one of the most immersive stadiums in the region. If you make prior appointments, you can take a guided tour of the stadium to complete the visit.

How to Reach Michigan Stadium

Love this? Explore the entire list of places to visit in Ann Arbor before you plan your trip.

Fancy a good night's sleep after a tiring day? Check out where to stay in Ann Arbor and book an accommodation of your choice.