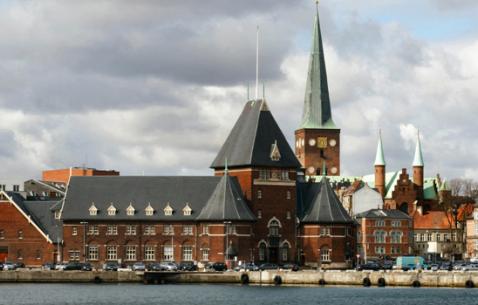 Alternatively known as the City of Smiles and the City of Cafes, Denmark’s second largest town is a charming mixture of the old and the new. This romantic mix is a delight to all the young couples who visit the city – indeed, Aarhus has the lowest average age in population in all of Denmark.

It’s culturally rich, thanks in a large part to it’s student population and this is celebrated with one of Europe’s most popular cultural festivals: the Aarhus Festival Week.

The town was originally a Viking settlement. Over the next thousand years, while the favourable geographic location directed much progress it’s way, it also brought the plague, fires and invaders, a combo that the town suffered much from. Still, it persevered, especially due to the expansion of the expansion of the railway and the harbour (which is one of the most important in northern Europe.

Essential travel information and Aarhus tips for your visit

Plan Your Trip To Aarhus

The best tours and activities in the city, guided by experts to give you a local insight to the best of Aarhus