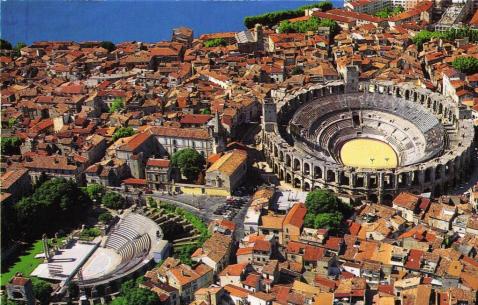 With a long, rich and vibrant history, Arles, Southern France is a picturesque city. The city’s historical significance deemed the Roman and Romanesque Monuments of Arles as part of the UNESCO World Heritage Sites in 1981. This city has been occupied since 800 BC after which it was conquered by the Romans in 123 BC and became an important centre of trade and commerce. The city reached its peak of influence during the 4th century as it was used as a headquarters during military campaigns. Consequently, the city became a part of France by the 1300s.

Arles is also famous for being the home of the famous post-impressionist painter Van Gogh from 1888-1889. You might think it’s a very short while and cannot possibly be Arles’s claim to fame, but you will be surprised to know that the artistic genius created over 300 painting and drawings during this time.

This city is best enjoyed on foot. In fact, the Arles tourism office has arranged several walking tours of the city including a walk that takes you to the places that Van Gogh painted and the sights that he visited—including the hospital where he was treated after cutting his ear, and a walk dedicated to the several UNESCO World Heritage sites of this historical city. The city is also famous for its bull fights that are hosted between April and October—a truly captivating sight for those who like a little bit of tradition during their travels abroad.

History, antiquity, culture and charisma—this city has got it all. Arles’s picturesque, sublime charm will take you back in time to the simpler days. While on a travel to France, head to Arles as soon as you can. Get Going!

Essential travel information and Arles tips for your visit

Plan Your Trip To Arles

The best tours and activities in the city, guided by experts to give you a local insight to the best of Arles