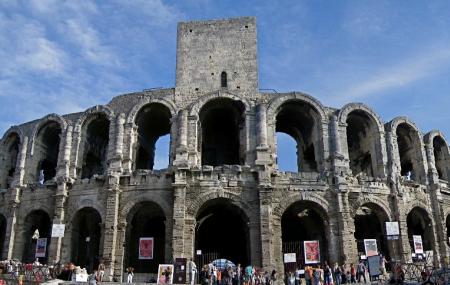 When it was built in 90AD, while Arles was a thriving Roman city, the awe-inspiring Amphitheatre d'Arles also known as the Arènes d’Arles was a place for entertainment which included chariot races, bloody hand-to-hand battles, gladiator fights and animal hunts which took place here until the end of 5th century. Today, it remains one of the earliest Roman Monuments and spreads across a huge area as proof of the city’s transition from an ancient city to a medieval European one.

During the middle ages the arena changed into a fortress. Today, it is a UNESCO World Heritage Site with its alluring structures of Roman charm and an air of archaic beauty beyond compare. The oval amphitheatre has a seating space for 20,000 people and is surrounded by open terraces, acriss-cross of arcades, a system of galleries, corridors – all exhibiting the splendour of earlier times.

The amphitheatre is bustling with spectators during April and mid-September, when the Feria d’Arles is organised. The famed festival is held every year and is centres around bull activities. The matadors project their skill and valour required to fight a bull and is received by an exuberant crowd. Plays and concerts too are held regularly in the Amphitheatre d'Arles.

57.38% of people prefer walking in order to reach Amphitheatre D'arles