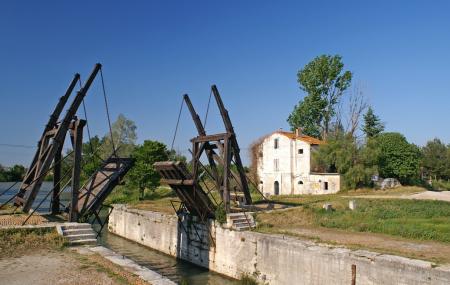 The Pont de Langlois or the Langlois Bridge was constructed in the first half of the 19th century as one of the crossings over the Arles to Bouc Canal. In 1930, the original drawbridge was reinforced by concrete. But sadly, just 14 years later, it was blown up by the Germans along with all other bridges at the canal.

The Pont de Langlois is also famous as the Pont de Van Gogh. The city of Arles has been pretty enamoured by the great artists and for good reason. Like many places in Arles, the Pont de Langlois too has been an inspiration to Vincent Van Gogh, who produced 9 artworks – 4 oil paintings, one watercolour, and 4 drawings –of the site in 1888. After its destruction in 1944, the bridge was reconstructed to recognize the works of the artist.

Today, a lot of art enthusiasts visit the drawbridge to pay their respects to the painter. It is a wonderful location to spend an evening appreciating Van Gogh’s art and inspiration.