Temple Of Isis At Philae 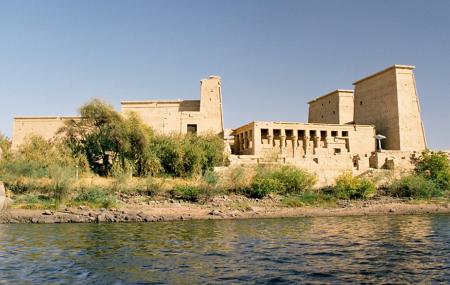 Find hotel near Temple Of Isis At Philae

Philae is actually the island that the temple USED to reside on. The construction of the Aswan Dam led to the island’s flooding, so the UNESCO had the whole complex relocated to the Agilkia Island nearby.

The temple here is dedicated to Isis, the goddess of motherhood, magic and fertility, and to her love for Osiris. Compared to most Egyptian god and goddesses, Philae was actually being worshipped quite recently upto to the 6th century A.D! And no wonder during the height of Roman power, she was the greatest of Egyptian gods, her influence reaching all the way to Britain. During the reign of Emperor Justinian, the temple was used as a church. Over the centuries, Early Christians (who carved crosses into the walls) and Muslims damaged much of the temple.

At the island, you’ll see the main temple with it’s 1st Pylon (a monumental gateway of two truncated pyramidal towers) and a forecourt to the 2nd Pylon which leads into the Hypostyle Hall and also the very first chapel dedicated to Isis. Other monuments to see include The Kiosk of Trajan, the Chapel of Osiris, The Temple of Horus, The Temple of Hathor, The Gateway of Tiberius, the Gateway of Diocletian, and the Temple of Augustus.

At night, you’ll be able to see a fantastic sound and light show the spectacle immerses you in the environment of the Temple; a voice set to music narrates the story if Isis and Osiris. It’s usually held twice an evening, and in multiple languages (at least once in English).

Entrance Ticket Details For Temple Of Isis At Philae

Temple Of Isis At Philae Hours

How to Reach Temple Of Isis At Philae

Love this? Explore the entire list of places to visit in Aswan before you plan your trip.

Fancy a good night's sleep after a tiring day? Check out where to stay in Aswan and book an accommodation of your choice.

People normally club together Abu Simbel Temples and High Dam while planning their visit to Temple Of Isis At Philae.