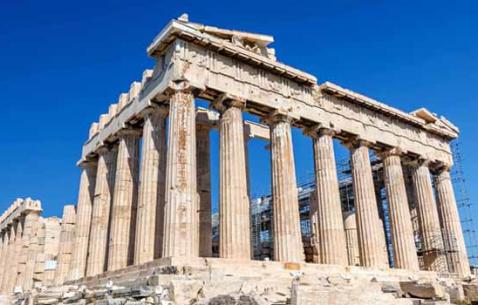 The largest city and the capital of Greece, Athens is an enchanting place with a glorious history. Arguably the motherland of western civilization, Athens is one of the world’s oldest cities. Spread across the city, you will find lots of ruins and archaeological excavation sites on your Athens trip. It is said that the city has been constantly inhabited for 7000 years and even though modernization has seeped it’s way through, the culture of this city still remains as intact as ever.

The city of Athens has the most important archaeological monuments of the country and most of them are associated with Greek Mythology. These include the Acropolis, the Odeion of Herodes Atticus, Olymbion, the Temple of Posedion, Theatre of Dionysus and the Roman Market. Donot forget to visit each of them and explore Greek Mythology in a way that you would remember forever. Even though its history is its most prominent feature, Athens is not only about archaeological ruins. Athens has a vibrant nightlife and is the perfect place even for people who want to visit only high end shopping destinations.

Geographically speaking, Athens is surrounded by Mount Parnitha, Mount Aegaleo, Mount Hymettus, Mount Penteli and the Saronic Gulf in the southwest. The city extends itself over 2,928 kilometers² of land. River Ilissus flows through Athens and was the initial reason of civilization. All of these features are the reason why the city rates so high in terms of beautiful views and landscapes.

One marvellous thing about Athens is its architecture and how different the cityscape looks. You will find ancient structures and ruins right next to modern glass buildings and malls. You will yourself realize that Athens is the perfect blend of history and civilization with contemporary lifestyle. All in all, Athens offers you the best of both the worlds and you should definitely include it in your list of places to be at! Each one of you should visit Athens at least once and experience all that it has to offer considering the best time to visit Athens.

Essential travel information and Athens tips for your visit

Plan Your Trip To Athens

The best tours and activities in the city, guided by experts to give you a local insight to the best of Athens