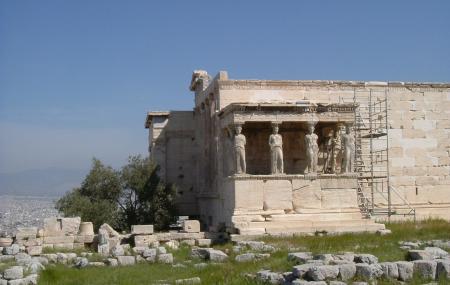 Another testament to the astonishing architecture of the Ancient Greeks, the Erechtheion was built as a supplementary temple to the Parthenon in 420 BC. What strikes the visitor regarding its structure is its facade which consists of pillars built in the shape of women. At the time when this temple was built, the eastern part of it was dedicated to Athena, whilst the western part was dedicated to local hero Boutes, Hephaistos and other gods and heroes. Housing the older and newer cults, this temple became a unique structure in itself. This temple also houses the site of the ‘Sacred Tokens’, the marks made by Poseidon’s trident and the olive tree, the gift of Athena to the city of Athens.

The carving on the numerous pillars is something that is worth careful scrutiny. The symmetry, detail and perfection managed by the craftsmen are worth noting. This structure might seem like just any other ruin but if you look at it closely enough, you shall be able to see its original architectural brilliance. The strength of its architecture is equally commendable. It was built on uneven ground and yet the Greeks were able to build a wonderful foundation. Not a site to miss!

Re-live the good old times and know about the Greek culture during your Athens trip by visiting the iconic Erechtheion. A supplementary temple to the Parthenon and built in 420 BC, this ancient structure is attracting tourists from across the globe, since decades. The best way to explore this attraction is by getting the Erechtheion tickets from the ticket counter. If you want to ditch the line, then you can book the Erechtheion tickets, well in advance. You can also book the Erechtheion tour tickets to get a guided tour of the attraction. Also, visit the popular attractions in the city by following Athens itinerary 1 day.

How to Reach Erechtheion

53.47% of people prefer walking in order to reach Erechtheion

People normally club together Temple Of Athena Nike and Acropolis while planning their visit to Erechtheion.

People also prefer to start their day with Erechtheion.