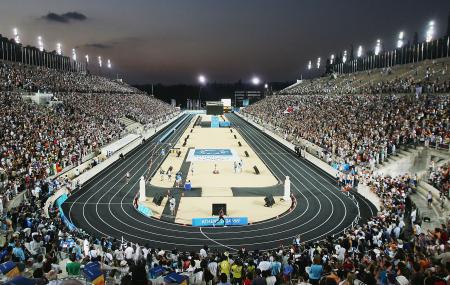 Constructed in 4th Century B. C, the Panthenaic Stadium is reclaimed to have hosted some of the most significant events in Athens. With a series of reconstructions since then, this stadium has become one of the best preserved stadiums from ancient Greece. Today, it can be utilized as a proper stadium in the city. This wonderful marble structure is certainly one of the must-see sights in Athens.

The Stadium was built in the valley between two hills in the ancient times. The oblong shape of the place has been retained while making it better equipped for its modern use. The many rows of stairs that stretch across the stadium can accommodate a whopping 45,000 spectators today. But what is even more impressive is that it could accommodate around 80,000 in 1896 when it was renovated for the Olympics.

One of the largest stadiums in Greece, Panathenaic is popular attraction for sports lovers and folks alike. You can enter the stadium by paying certain Panathenaic Ticket Prices at the counter. You can even roam the surrounding in the morning if you wish to. Students and visitors coming to Buy Tickets for Panathenaic get a little concession on Panathenaic Ticket Cost. Do visit the place and witness the charm the place is known to behold. Also, visit the popular attractions in the city by following Athens itinerary 1 day.

How to Reach Panathenaic Stadium

74.88% of people prefer to travel by car while visiting Panathenaic Stadium

People normally club together National Gardens and Benaki Museum while planning their visit to Panathenaic Stadium.