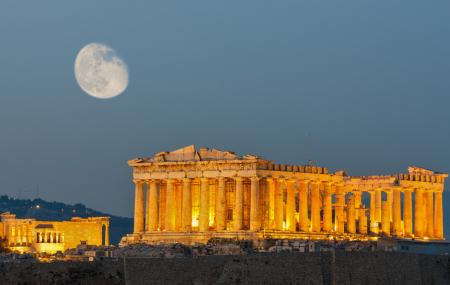 The Parthenon is undoubtedly one of the most iconic structures in the Acropolis. It was built as a temple. The columns of the building surround the inner sanctum. This lovely piece of architecture was a tribute to the goddess Athena, after whom the city of Athens has been named.

Although just a vestige of what it must have been at the time of its glory, the structure is still simply spectacular. Embellished by several beautiful designs and sculptures, the Parthenon is a shining example of ancient Greek architecture. The fact that it still stands strong in the city is testament to the brilliant feat of architecture that it is.

Several people will travel to Athens just to see the Parthenon and why not. Not many people realize that the building appears perfectly straight due to optical illusions created by its architects. Just imagine that kind of masterful architecture in a time without any modern tools or implements. If you love history make sure to hire a guide to learn more about this place. In any case, the Parthenon is sure to surprise as well as amaze you.

One of the most iconic structures in the city of Acropolis, the monument is a great subject of delight for architects and historians. There are certain Parthenon Ticket Prices for the entrance in the premises. There is also a concession for Greek people if the Buy Tickets for Parthenon. The Parthenon Tickets can be availed from the premises itself. For a much cheaper Parthenon Ticket Cost option, go for combined ticket. The ticket price for the attraction is quite reasonable and worth visiting the site. Also, visit the popular attractions in the city by following Athens itinerary 1 day.

How to Reach Parthenon

90.96% of people prefer walking in order to reach Parthenon

People normally club together Temple Of Athena Nike and Theatre Of Dionysus while planning their visit to Parthenon.