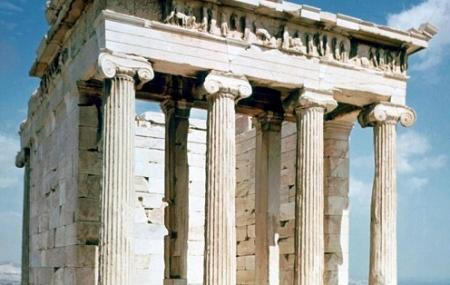 Temple of Athena Nike is in many ways the amalgamation of two different phases of history. The building stands for victory and was built for Athena in her victorious manifestation. A beautiful ode to her in white marble, the temple has well-preserved columns that render it an astonishing grace. It is hard to imagine that the monument was built so long ago.

The temple isn’t the original one that stood here. The Persians had destroyed many of the temples during their invasion of Athens. This is the rebuilt version of the one that was destroyed. It has also recently undergone Anastylosis which means it was reconstructed slightly by using the fallen stones from the original. The gorgeous marble building is certainly one of the must-see attractions on Acropolis Rock.

The Temple of Athena Nike is a temple in the Acropolis of Athens and was named after the Greek goddess Athena Nike. The temple was built around 420BC and is one of the earliest temples in Athens. This temple was designed by the architect Kallikrates and is 11 metres tall featuring monolithic columns. In 1930s, the temple was dismantled to address structural issues and it was in 1998, that the reconstruction began. The Temple of Athena Nike is today one of the most visited attractions in Athens. Also, visit the popular attractions in the city by following Athens itinerary 1 day.

How to Reach Temple Of Athena Nike

93.09% of people prefer walking in order to reach Temple Of Athena Nike

People normally club together Acropolis and Parthenon while planning their visit to Temple Of Athena Nike.