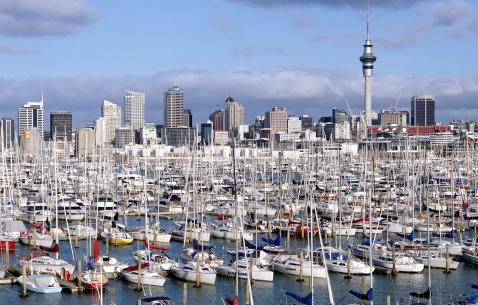 Auckland is surrounded by beautiful beaches, uninhabited islands volcanic cones. Did you know that, according to a myth, Auckland was created during the battle between two iwi (tribes)? The fierce battle created deep cracks in the earth, thrusting upwards the many volcanic cones one sees today around Auckland.The city is bustling with world-class shopping centres, restaurants, bars, art galleries wine districts, rainforests and a lot more. Each one of you should visit Auckland at least once and experience all that it has to offer considering the best timet o visit Auckland.

Largest urban area of New Zealand, Auckland has also got names like ' a maiden sought by hundred lovers', thanks to its natural beauty. Once a base against the Maori Kong Movement, Auckland, today is one of the most popular tourist destinations in the country. Urban landscapes, harbours, rivers, gulfs and a good number of ethnic groups, visiting Auckland is one of its kind experience. Also known as the City of Sails, there are plenty of yatch clubs in Auckland that'll keep you hooked. Horse and greyhound racing, rugby and cricket matches, events celebrating different ethnicities, Auckland hosts them all. So, if you want to opt for a destination which is not your mainstream one and want to explore the underrated one, then opt go with Auckland. It's pretty sure that you'll never get disappointed.

Essential travel information and Auckland tips for your visit

Plan Your Trip To Auckland

The best tours and activities in the city, guided by experts to give you a local insight to the best of Auckland