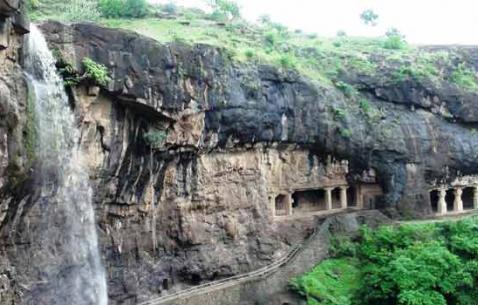 The Mughal Emperor Aurangzeb (then a prince) fell in love with the city in the 17th century. So they named the city after him. It subsequently came under the control of the British Raj, the Princely State of Hyderabad, and finally became a part of Maharashtra in 1960.

Right now, it’s world Heirtage Sites, the Ajanta and Ellora caves, make it the queen of Maharashtra tourism. They call it the “City of Gates”, for the fifty-two Mughal-era gates spread throughout the city. The population is pre-dominantly Hindu, but also has a large Muslim population. And though it is known as a tourism hub, it’s also one of the fastest growing cities in Asia.

The city is also famous for it’s Paithani textiles, an ancient saree weaving tradition; Himroo fabrics; and Bidriware, which are works of gold and silver inlays on copper. Despite being staunchly Maharasthrian now, the city retains much of it’s Hyderabadi cultural flavour. Marathi and Urdu are the main spoken languages.

Aurangabad was the part of the Nizam’s Hyderabad State until it was merged into Independent India in 1956. In 1960 it became a part of Maharashtra and also became a district headquarter.

Aurangabad is a flourishing industrial centre, a very interesting place of heritage and traditional richness and it is also an exotic destination which will attract tourists with a deep interest in architecture and the evolution of religions.

For a holiday with an ancient edge, Aurangabad is the destination for you. Travel guides will heartily recommend great Maharashtrian food, interesting historical sites, good shopping destinations and all modern amenities that will make your holiday more pleasant than you had expected.

Essential travel information and Aurangabad tips for your visit

Plan Your Trip To Aurangabad

The best tours and activities in the city, guided by experts to give you a local insight to the best of Aurangabad