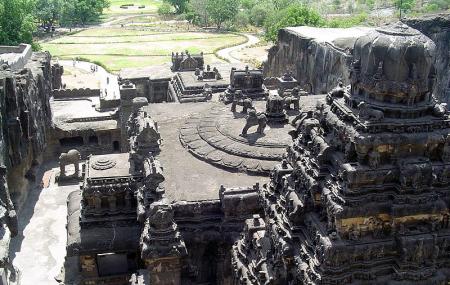 The Ellora Caves in Maharashtra are the finest examples of rock cut architecture in India. It is a World Heritage Site as designated by the UNESCO. These caves are known for Hindu, Buddhist and Jain cave temples. These were built during the 6th and the 9th centuries during the rule of the Kalachri, Chalukya and the Rashtrakula dynasties. It is a collection of 34 caves cut out from the straight face of the Charanadri Hills.

The Buddhist caves here include large halls and various rooms that were earlier used for the purposes of dining, sleeping and cooking. There are many carvings of Lord Buddha and the Jatakas and also of many Buddhist saints.

The Hindu Caves were constructed mostly during the reign of the Kalachuri dynasty. A few caves were also built in the reign of the Rashtrakula dynasty. All of the caves are so different from each other but equally beautiful. The most important Hindu cave is known as the Kailasnath Cave. This was designed as a dedication to Lord Shiva’s abode in the Kailash Mountains.

The five Jain caves in the Caves all belong to the Digambara sect and were built strictly maintaining the authenticity of the Jain culture. These caves are not as large as the other caves but outshine all others in the aspect of art and designs.

How to Reach Ellora Caves

Love this? Explore the entire list of places to visit in Aurangabad before you plan your trip.

Fancy a good night's sleep after a tiring day? Check out where to stay in Aurangabad and book an accommodation of your choice.

90.24% of people prefer to travel by car while visiting Ellora Caves

People normally club together Tomb Of Aurangzeb and Grishneshwar Jyotirlinga Temple while planning their visit to Ellora Caves.