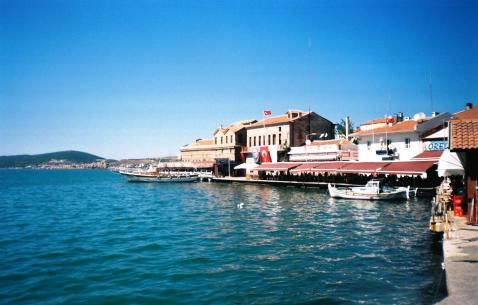 Ayvalik is a coastal city situated on the Aegean coast in Turkey. Once an important trade centre, the town is now known for the remains of its rich Greek heritage and a fair blend of Greek and Cretan cultures which allows Ayvalik to be on the itineraries of travellers. The city also boasts of being one of the most significant olive oil producing and exporting places in Europe.

The city was first inhabited in the pre-historic ages. But it gained importance after the Byzantine period when it became a part of the Ottoman Empire. A lot of Greek settlers were seen during this period. After the fall of the Ottomans, Greeks and Turks moved to Greece and Turkey respectively. Their culture, however, remained back- giving the city its characteristic cultural ambience.

Though extremely beautiful, the city is not very particular on tourism except for the considerable increase in the flow of tourists during summer. The city has two magnificent beaches with palm trees lined up across the shores. The city is also known for its olive groves rapidly spread in and around the Ayvalik.

Ayvalik is known for its splendid architecture and sightseeing structures which most of the time follows the traditional Ottoman, Greek or Cretan cultures. The city has a number of Greek churches that were later renovated into Turkish mosques or museums that attract tourists.

This ancient town, which is now a member of Norwich-based European Association of Historic Towns and Regions due to its architectural and cultural heritage, gives you a unique visiting experience with its everyday culture reflected on the streets. So, add Ayvalik to your vacation planner if you want a holiday unique in itself.

Essential travel information and Ayvalik tips for your visit

View all Hotels in Ayvalik