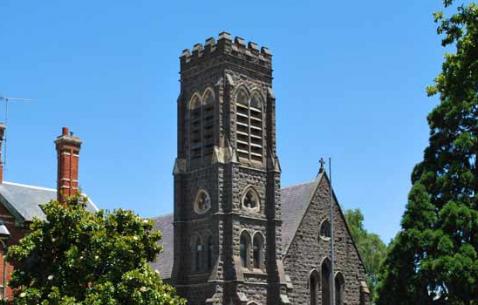 Ballarat /ˈbæləræt/ is a city located on the Yarrowee River and lower western plains of the Great Dividing Range in the state of Victoria, Australia, approximately 105 kilometres (65 mi) west-north-west of the state capital, Melbourne. It is the third most populous urban area in the state, with an estimated population of 99,841. It is the state's most populated inland settlement, and third most populated inland settlement in Australia. People from Ballarat are referred to as Ballaratians. The City of Ballarat local government area encompasses both the Greater Ballarat urban area and outlying towns, with an area of 740 square kilometres (290 sq mi), and has an urban area population of 93,501. Ballarat is its most populous urban centre, seat of local government and administrative centre. It was named by Scottish squatter Archibald Yuille who established the first settlement − his sheep run called Ballaarat − in 1837, with the name derived from a local Wathaurong Aboriginal word for the area, balla arat, thought to mean "resting place". The present spelling was officially adopted by the City of Ballarat in 1996. It is one of the most significant Victorian era boomtowns in Australia. Just months after Victoria was granted separation from New South Wales, the Victorian gold rush transformed Ballarat from a small sheep station to a major settlement. Gold was discovered at Poverty Point on 18 August 1851, and news quickly spread of rich alluvial fields where gold could easily be extracted. Within months, approximately 20,000 migrants had rushed to the district. Several Australian mining innovations were made at the Ballarat diggings including the first use of a Chilean mill in 1851 and the first use of a mine cage in 1861. Unlike many other gold rush boom towns, the Ballarat fields experienced sustained high gold yields for decades. The Eureka Rebellion began in Ballarat, and the only armed rebellion in Australian history, the Battle of Eureka Stockade, took place on 3 December 1854. In response to the event the first male suffrage in Australia was instituted and as such Eureka is interpreted by some as the origin of democracy in Australia. The gold rush and boom gave birth to many other significant cultural legacies. The rebellion's symbol, the Eureka Flag has become a national symbol and is held at the Museum of Australian Democracy at Eureka in Ballarat. Other nationally significant heritage structures include the Ballarat Botanical Gardens, established 1857, the best example of a regional botanic gardens in Australia with the greatest concentration of public statuary including the official Prime Ministers Avenue; the longest running lyric theatre building, Her Majesty's, established 1875; the first municipal observatory, established 1886; and the earliest and longest memorial avenue, the Avenue of Honour, established between 1917 and 1919. Proclaimed a city in 1871, its prosperity continued until late in the 19th century, after which its importance relative to both Melbourne and Geelong rapidly faded with the slowing of gold extraction. It has endured as a major regional centre hosting the rowing and kayaking events from the 1956 Summer Olympics. It is the commercial capital of the Central Highlands and the largest city in the Goldfields region of Victoria—a significant tourist destination. Ballarat is known for its history, culture and its well-preserved Victorian era heritage.

Planning a vacation to in ? This vacation planner will provide you with all the essential information you need. Tour packages of are of 1 to 2 days duration.

The best tours and activities in the city, guided by experts to give you a local insight to the best of Ballarat