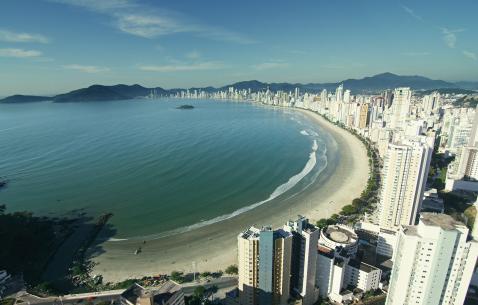 Partying in Brazil is a fresh of breath air but the parties in Balneario Camboriu are nothing short of urban legends. Balneario Camboriu- Brazil’s chic party place with sloping hills that descend to its magnificent coast line, is a wonder in itself.

Balneario Camboriu, is in a nut-shell, all things unique to Brazil- be it its own version of Christ the Redeemer (at Rio de Janiero), beautiful people, warm sea-breeze, enviable hangout places and awe-inspiring natural terrain which is the icing on the cake. With so much to choose from, your visit to Balneario Camboriu will be anything but predictable.

The city of Balneario Camboriu is known for housing some of the best clubs around the world and is officially named as the capital of electronic music, owing to its electrifying music scene. To top it off, most of the clubs are located close to the popular beaches- welcoming party-heads from all around the world!

Originally home to many local tribes of the region, the city attracted a lot of privileged families in the late 18th and early 19th century. This highlighted the region to a vast population of holiday-ers.

Soon, tourism flooded the whole region owing to the number of hotels and holiday resorts which popped in multiples around Balneario Camboriu. The city lights, the never ending music, the beautiful sunsets, stunning wildlife sanctuaries, aquariums and rich flora, all combined with Brazil’s affectionate population, offer a rare peak into this side of the world.

Today the city is known for its fresh appeal and is a favorite place of nature-lovers, adventure seekers, beach admirers and anyone who wants to experience the Brazil less talked about. For anyone who visits, you are bound to unravel a few secrets of the city for sure!

Read on to know what your travel guide will miss telling you about Balneario Camboriu.

Essential travel information and Balneario Camboriu tips for your visit

Plan Your Trip To balneario camboriu

The best tours and activities in the city, guided by experts to give you a local insight to the best of Balneario Camboriu