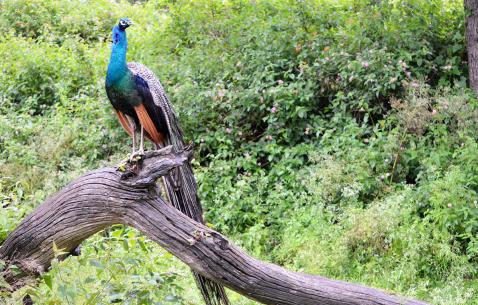 Bandipur, a small town in Mysore is primarily known for the Bandipur National Park. Engraved in the greens and forests, it has the most fascinating of wildlife and nature, exquisitely on display. The drive to the place is a trail in its own. With trees and greenery on both sides, once you enter the national park you’ll be beaconed by deers in herds. There’s the occasional spotting of bisons and herds of elephants. There’s a hawk flying by and some perched on branches too. Pretty little colorful birds and if you are lucky, then the tiger too.

It falls enroute Ooty, which is a popular hill station and is known for its warm and comfortable climate throughout the year. The rains are erratic here and usually sporadic. But when it does rain, it blooms up the lushy greens and adds to the variety of flora here. One can enjoy camping and comfortable camping here or the sightseeing safari tours that form the basis of all here.

The Nilgiri fauna has some of the most vulnerable kind of species, which are protected and preserved here. A lot of species of this and the adjoining areas are preserved here. The Bandipur National Park holds a large variety of flora too apart from its exquisite and extravagant fauna. It is home to sandalwood and rosewood trees, apart from luscious variety of fruit and flower trees and shrubs.

Essential travel information and Bandipur tips for your visit