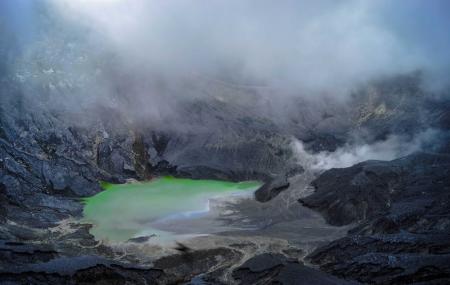 This is the only crater in Indonesia where tourists can drive up to its rim; this active volcano offers astonishing view and has a distinctive shape like an overturned boat. The huge crater is walk able and you will be greeted by the sulphur fumes that the volcano is emitting for years. The eruption of this volcano has made a significant change in the geographical features of its surrounding areas and contributed immensely to make the land fertile which has overall enhanced the eco-system. The flow of the lava carrying large boulders has formed huge cliffs over which waterfalls leapt to form the lake that covers the Bandung plain.

Located at the highland just at the outskirt of Bandung, Tangkuban Perahu Crater is surely a perfect place to enjoy cool air and relaxing sceneries after a series of shopping activities in some of the city's factory outlets or the popular Pasar Baru Trade Center. For a rejuvenating sensation, visitors can continue their journey to the nearby Ciater's Revitalizing Hot Springs. Also, visit the popular attractions in the city by following Bandung itinerary 1 day.

How to Reach Tangkuban Perahu

Love this? Explore the entire list of places to visit in Bandung before you plan your trip.

Fancy a good night's sleep after a tiring day? Check out where to stay in Bandung and book an accommodation of your choice.

92.93% of people prefer to travel by car while visiting Tangkuban Perahu

People also prefer to start their day with Tangkuban Perahu.