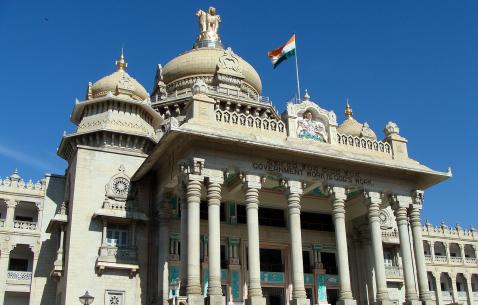 Also known as Bengaluru, Bangalore is the capital city of state of Karnataka. Popular as “The Garden City”, it is dotted with gardens and green retreats that are definitely a treat to eyes. It is a teeming metropolis which is home to many industries from both, the private and public sector. But its main claim to fame is its worldwide significance as an IT Hub and a favored BPO city. Bangalore is on par with the other metropolises in the country as far as industry and infrastructure are concerned. Situated on the Deccan plateau in south eastern Karnataka, Bangalore is a rich city, both culturally and economically. With so many tourist attractions and places to visit of diverse fields, this South Indian city will awe you.

Endowed with a beautiful weather that remains constant throughout the year, this city today looks enticing with its dazzling dining, drinking and shopping scene. Representative of the modern face of India, this city is strewn with many attractions that consist of historic, cultural, religious and scenic. The colonial era heritage stands well preserved and glimpses well amidst the modern day skyscrapers and neon lit buildings. It is because of its overwhelming IT presence that this city has earned the title of being the Silicon Valley of India. The highlights here include: Cubbon Park, Vidhana Soudha with its gigantic Neo-Dravidian legislative building, Bangalore Palace and Tipu Sultan’s Summer Palace, to name a few. Each one of you must take Bangalore tour at least once and experience all that it has to offer considering the best time to visit Bangalore.

Essential travel information and Bengaluru tips for your visit

Plan Your Trip To bengaluru

The best tours and activities in the city, guided by experts to give you a local insight to the best of Bengaluru