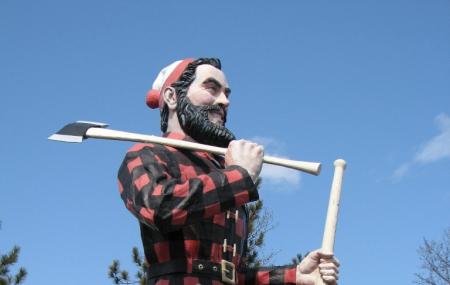 Bangor claims to the Birthplace of Paul Bunyan. A titan of a statue in the city reminds Bangorians of their connection to this legendary character.

Maine certainly has a lot of trees all around. That is why it is really nice to see the hulking woodsman here. Bangor's Paul Bunyan, is "Reputed to be the largest statue of Paul Bunyan in the world" according to its sign. It stands on a stone pedestal in front of the Bangor Civic Center. The statue is 31 feet high and weighs 3,700 pounds. This is excluding its double-sided ax and peavey.

The statue was donated to Bangor in 1959 by New York-based builders Messmoor and Damon. The occasion was Bangor's 125th anniversary. It was designed by local artist J. Norman Martin. He was reportedly paid $137 for his efforts.

Paul has been outfitted with a giant fez (for a Shriners convention) and a huge bandana (for a Willie Nelson concert) over the years. He is thoughtfully put into the park so that shutterbugs can get all of him into their photos without having to disrupt activities in the middle of Main Street!

How to Reach Paul Bunyan Statue

Love this? Explore the entire list of places to visit in Bangor before you plan your trip.

Fancy a good night's sleep after a tiring day? Check out where to stay in Bangor and book an accommodation of your choice.

88.52% of people prefer to travel by car while visiting Paul Bunyan Statue