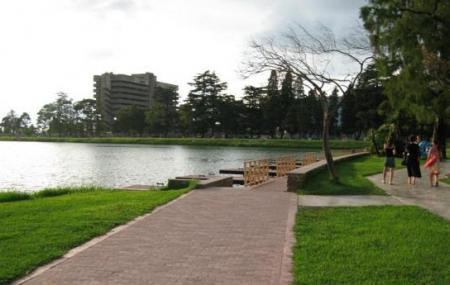 This is where the Georgian’s grew up as kids!

Batumi’s oldest public park, 6 May Park accommodates much more than what an average public park usually does. A dolphinarium, an aquarium, a zoo and even a lake.

Designed and constructed by a Prussian gardener, Ressler in the 18th century, the park had its name changed when the Russian Emperor Alexander III visited and planted Magnolia in 1888. As an honor to this occasion, the garden was renamed as the “Alexander Garden”. It was finally named 6 May Park in 2006 after a lot of reformation. Throughout the garden, you will spot spectacular sculptures and statues, that also make up for great phot opportunities.

The “Nuri Geli” lake inside the 6 May Park is a beautiful lake, albeit a sad legend behind it. The legend goes that, the name of the lake is derived from a baby boy whose name was Nuri, toppled into the lake and drowned. After his demise, his mother visited the lake daily mourning “Nuri geli” which means Nuri I am waiting for you! A heart-wrenching story indeed, this lake is charming, to say the least.

How to Reach 6 May Park

Love this? Explore the entire list of places to visit in Batumi before you plan your trip.

Fancy a good night's sleep after a tiring day? Check out where to stay in Batumi and book an accommodation of your choice.

90.16% of people prefer to travel by car while visiting 6 May Park

People normally club together Dolphinarium and Batumi Archaeological Museum while planning their visit to 6 May Park.