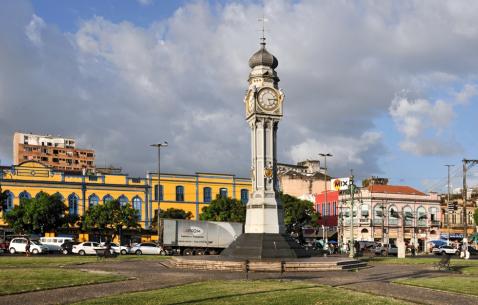 Steamy Belem was founded when the Portuguese decided to build a fort here in 1616 to protect their investments in the area. Thus, it is the first of the Amazon Rainforest’s colonial towns.

It’s located practically on the mouth of the Amazon River; the Atlantic Ocean is barely 100 kilometres downriver. This made it an important port for the 17th century sugar trade. Later, cattle ranching became important, and in the 19th century, the city was critical to the rubber trade. This trade strategic importance meant that it saw much political strife and bloodshed before all then ended in the 19th century.

Touristic-ally, the city is loved for its charming colonial era districts. There are many historical buildings and areas, quite well preserved. This includes one of Brazil’s oldest churches, and one of Brazil’s largest. The area surrounding the city is full of natural tourist attractions, especially the Biopark Zoo. The museums in the city mostly deal with the culture and people of the Para region. The nightlife is revelrous, and mostly concentrated around the Estacao das Docas area. The beer is rich. The markets are rich. The food is local and unique; you must not miss the many flavors of ice-cream!

There are also two major out of town destinations for sightseeing. The lovely island of Algodoal is practically primitive in terms of amenities, but utterly charming; try spending an entire weekend exploring its swamps and beaches. The Ilha de Marajó is another appealing sandy retreat. You can get local travel guides to take you up river.

Essential travel information and Belem tips for your visit

Plan Your Trip To belem

The best tours and activities in the city, guided by experts to give you a local insight to the best of Belem