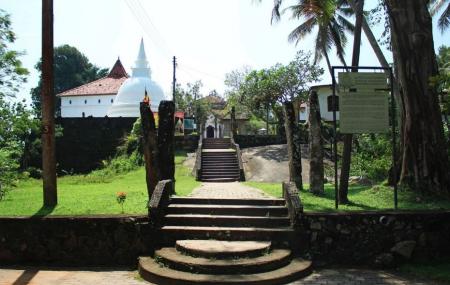 Also known as Galapatha Raja Maha Viharaya, this temple is said to be one of the ancient Buddhist temples of the city. Story goes that the temple was built in 12th century. However, with Dutch invasion in 16th century, the temple faced serious damage. Later on, the temple was rebuilt. Today, when you visit the temple you get to see its renovated version.

The temple is famous not only because it is ancient but it also because of the tooth relic of the 3rd disciple of Buddha who was buried in the Stupa.

How to Reach Galapatha Buddhist Temple

Love this? Explore the entire list of places to visit in Bentota before you plan your trip.

Fancy a good night's sleep after a tiring day? Check out where to stay in Bentota and book an accommodation of your choice.

91.94% of people prefer to travel by car while visiting Galapatha Buddhist Temple