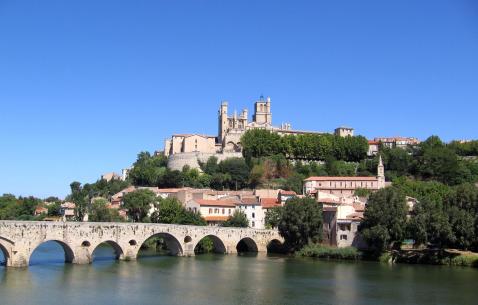 Beziers is a charming old city located in the Languedoc region of Southern France. Curled up on a stone bluff against the banks of River Orb about 10 kms away from the Mediterranean, it is said to be one of the oldest towns in the country. The city is famous in the whole region for its Wine production, arts, Bull fighting (Feria) and Rugby.

The city’s history is traced back to the Neolithic times. From the 10th to 12th centuries, the city became a capital of a Viscounty of Beziers. In 1209, it was said to be the first place under attack during the Albigensian Crusade, causing a bloody massacre between the Catharism and the Catholic Church.

Beziers boasts a well-established tourism, owing to its immaculate architecture and rich culture. The ancient city is known for its baroque style cathedrals, beautiful buildings and the UNESCO-Heritage site Canal du Midi located towards the South of town.

Around the town are ruggedly picturesque mountains, breathtaking Languedoc villages, abandoned castles, villas and mansions built with excellence which must be in the places to visit on your trip planners.

So, when Beziers is on your itineraries, have a leisurely stroll around the city, or ride a bicycle through the old canal, and indulge, watch a bull fight or rugby match and last but not the least, have a good Provencal meal with their traditional wines.

Essential travel information and Beziers tips for your visit