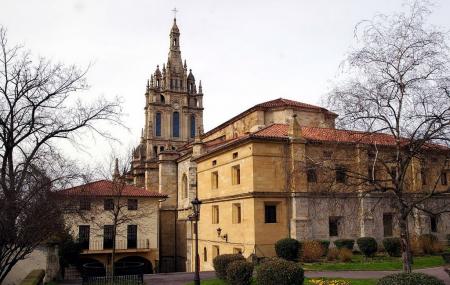 Find hotel near Basilica Of Begona

The Basilica of Begona is a famous basilica in the Spanish city of Bilbao. Dedicated to the patron saint of Biscay, the Basilica of Begona is a magnificent remnant of 16th century Gothic styled architecture in Spain. What is remarkable about the Basilica is that it took about a hundred years to build. That resulted in the union of different styles of architecture over the original Gothic design, something which gives the building a truly unique look.

The Basilica was first opened in the 17th century, and has stood more or less the same except for some renovation in the 19th century. The main entrance of the building was built sometime in the 16th century, in the shape of a glorious arch that was reminiscent of the works of Spanish architect Gil de Hontañón. The dizzying clock tower atop the Basilica has an incredible 24 bells, with the heaviest one weighing a tonne.

The Basilica of Begona is one of the most iconic landmarks of Bilbao, due to the history behind it, the reverence of the locals, and of course, its immaculate design. However, it doesn’t take an architect to appreciate just how stunning the Basilica looks, and that makes it a must for every member of the family.

How to Reach Basilica Of Begona

Love this? Explore the entire list of places to visit in Bilbao before you plan your trip.

Fancy a good night's sleep after a tiring day? Check out where to stay in Bilbao and book an accommodation of your choice.

88.41% of people prefer to travel by car while visiting Basilica Of Begona

People normally club together Church Of San Anton and Plaza Nueva while planning their visit to Basilica Of Begona.