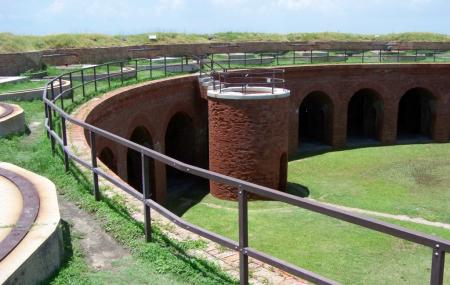 Mississippi isn’t known for its beaches, but that’s because ship Island is hidden offshore. The beautiful barrier islands, which are reached by ferry, have pristine white beaches, water perfect for a swim, and history enough to satisfy the most academically minded (the island was once used as the primary port of immigration for the French, in the 18th century). Today, the main tourist attraction here is the century and half old Fort Massachusetts. Like almost every thing in Biloxi, the island too has been catastropfically shaped by hurricanes; not only did Katrina cause significant damage to the fort, but Camille actually split the once whole island into two parts – East and West.

If you’re lucky, on the way over on the ferry, you’ll catch sight of Atlantic Bottlenose dolphins.

NOTE: The address, hours and ticket prices provided are for Ship Island Excursions.

How to Reach Ship Island

Love this? Explore the entire list of places to visit in Biloxi before you plan your trip.

Fancy a good night's sleep after a tiring day? Check out where to stay in Biloxi and book an accommodation of your choice.

People normally club together Institute For Marine Mammal Studies and Biloxi Beach while planning their visit to Ship Island.

People also prefer to start their day with Ship Island.