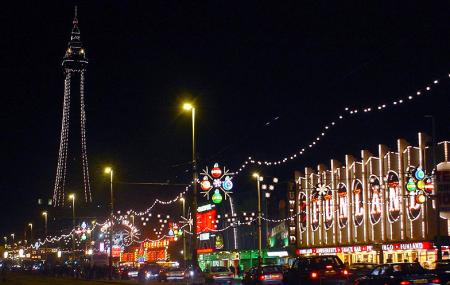 Every year, the city of Blackpool comes to life. For 66 a days a year every autumn, the city is home to the now famous Blackpool Illuminations, a unique festival of lights. Dubbed the greatest free light show on earth, this unbelievable spectacle is a massive installation stretching across the Blackpool Promenade, and features tons of different illuminations that will keep you stunned all night long.

The Blackpool Illuminations have been held since 1879, and is held every year, typically from August to November. 2013 was the first year that the festival was held for 73 days instead of 66, and it seems like the trend will continue over the years to come.

There are a lot of incredible tributes to modern day cultural icons, such as the Doctor Who illuminations, created as a homage to the hit English TV show. Another great annual installation is that of the Illuminated Trams, which run the length of the promenade during the festival.

2014 promises some new installations like Alice’s Garden, drawing on Lewis Carroll’s timeless classic Alice in Wonderland for inspiration, and the Mat Hatter’s Tea Party in particular.

Also coming up in the 2014 edition is the Dynamo, a new exhibit near the south pier with ever changing spinning colours in a whirlwind of light.

If you happen to be in Blackpool during the Blackpool Illuminations, get into a cab, hop onto a train or just take a walk down the Promenade to witness this fantastic show. This is one sight that has to be seen to be believed.

How to Reach Blackpool Illuminations

Love this? Explore the entire list of places to visit in Blackpool before you plan your trip.

Fancy a good night's sleep after a tiring day? Check out where to stay in Blackpool and book an accommodation of your choice.

54.92% of people prefer to travel by car while visiting Blackpool Illuminations

People normally club together The Blackpool Tower Dungeon and Ripley's Believe It Or Not while planning their visit to Blackpool Illuminations.